Millionaires Think Differently From Everyone Else (And It’s Mostly Unconscious) 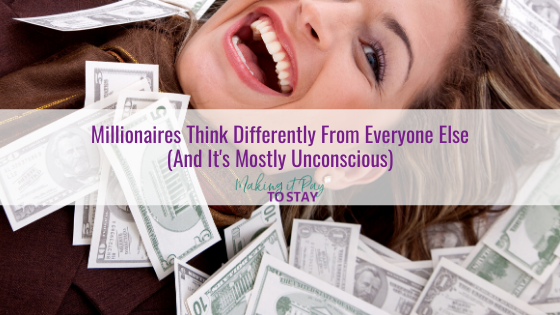 Making more money is easy, right? You just save and invest or go for a promotion.

Well, if you look at the life stories of most millionaires, that’s not what you find. Often, they made the money that they have today because of the way that they think about the world, not because they made a shrewd career move.

When you think about it, you need to be a little mad to become a millionaire. You need to be the type of person who has the confidence to leave the traditional structures of society behind and doing something fundamentally new. You reject the idea of slotting into a big organization and just becoming a cog in the machine. Instead, you see a vastly different role for yourself, way outside of the mainstream.

For this, though, to even cross your mind, you have to have a degree of arrogance. You need to believe that you can do things better than everyone else and that you have the skills to make it happen. If you’re somebody who automatically defers to authority, the life of a millionaire is not for you.

One of the keys to success, therefore, is never assuming that other people have it all worked out. Often, you’ll come across people in life who worship the state, prestigious institutions, universities, and high-profile companies. These people see a fundamental difference between their capacities and those of the alleged “elites.” They assume that the lifestyles of the people at the top of their professions are out of reach because they could never achieve the same level of skills. It’s like they are a different species.

People with the capacity to become millionaires, though, don’t see the world in these terms. Fundamentally, there is no difference between them and the elites right at the top of the social tree, other than a time lag. Eventually, they’ll get there – it’s just a question of how.

And here you can see the difference between the people who make a lot of money, and those who don’t. It has much less to do with intellect, background, or connections than you think. Even skill isn’t particularly relevant. The critical factor is mindset. Do you see yourself as somebody who could be in a position of great wealth and power, or is that “above your station in life?” The emotional answer you have to this question is critical.

What’s interesting about this whole conversation is that it defines successful people differently from everyone else. It’s not actually about money at all, but the unconscious beliefs that you have about yourself. You could walk past prospective millionaires in the street every day but never even realize. Furthermore, you could BE one of those people but haven’t found your lucky break yet.

Thinking differently isn’t always a good thing. It brings a lot of risks. You’re much more likely to have a successful life if you follow the well-worn path that everyone else does. But that wouldn’t be much of a life, now, would it?