Organizing A Trade Show For Your Local Area 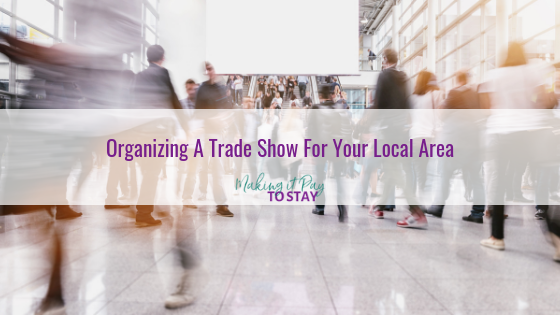 You’re part of your local business economy, and you’ve got a lot of fellow small businesses surrounding yours on the high street – what can you do to help them out? Well, you could organize a trade show, to make sure there’s a space for the companies in your area to showcase their best products and services.

And seeing as you’re the brains behind the plan, there’s going to be a lot of community spirit to go around! There’s a lot of benefits to hosting a business event, and most of all, being active in your commerce community acts as a great form of advertising, and it means you get to plaster your brand name and logo all over the city for a couple of weeks.

So with all that in mind, here’s just a few tips for putting on your very first trade show, and making sure it’s one to remember.

Get a Venue Early

If you’re going to organize a trade show, on behalf of your local business economy, then you’ll need to start researching early, to make sure there’s community interest in such an event. And the first thing to do, to kickstart these plans, is to find a suitable venue.

Ascertain what kind of venue you’ll need. For example, will it be a bar, or a community hall, or a park outside? What themes would these different venues allow you to employ? What kind of set decoration would attract the most attention? And which ones would be spacious enough? You’re going to need a place big enough to host at least 1500 people, even if you’re only expecting 500 sellers and guests alike.

It’s where a bit of corporate event planning would come in handy; if you’re thinking on a corporate scale, and you want the big wigs to come on down, you’re going to go as grand as possible. Treat every attendee, business and customer alike, as a VIP, to make sure your trade show plans are wanted against next year!

Last but not least, a trade show needs to have an aftermath, and it needs to be one with networking value. Even just a physical job board, advertising various job positions and the numbers/emails to contact if you’re interested, is a great way to allow the people in your area to follow up!

Organizing a trade show can seem like a monumental task, so break it down, and get your decisions in as early as possible.