Top Tips To Redesign Your Office For Productivity 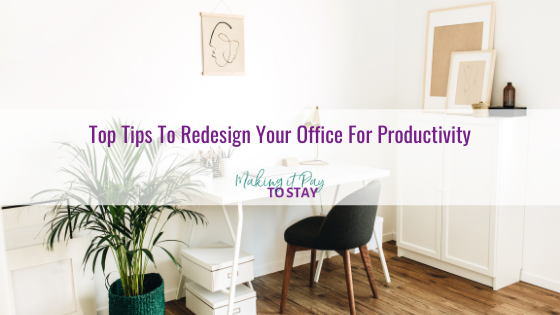 Small business owners often want their employees to be more productive. They’ll implement multiple measures to do so.

Some of the more notable include:

They often overlook the office space itself. That can have a significant impact on productivity. You should aim to optimize for this.

You mightn’t know how to redesign your office for productivity. While it may seem complicated, it shouldn’t be.

Certain things can be relatively obvious, such as hiring a professional office cleaning company to keep the office clean. These minor things can have a larger impact than you’d think.

If you focus on a few key areas, making your office more productive shouldn’t be a problem.

How To Redesign Your Office For Maximum Productivity

Lighting is one of the more important features to focus on in an office. You’d be surprised by the number of small business owners who overlook this, however.

Poor lighting can have multiple negatives associated with it. These not only affect your employees’ productivity, but also their mental health and other things.

You’ll need to make sure that there’s enough light in your office. Aiming for natural light is recommended.

Having windows placed around the office will help with this. The more light that can get in, the better.

When it comes to lightbulbs, you should aim to get ones that don’t cause eye strain. The placement of the bulbs will also be a priority.

They shouldn’t interfere with your workers’ ability to use a screen. With the right lighting, you’ll see a  boost in employee happiness and productivity.

Go With ‘Variety’ Instead Of ‘Open’

Open plan offices boomed in popularity several years ago. Quite a few people believed that the design choice increases productivity.

While that could be true, it only is when it’s used in conjunction with other things. Focusing primarily on creating an open-plan office mightn’t be recommended.

Redesigning your office so that there’s a balance between open plan areas and private offices is a much better alternative.

Giving employees private spaces – such as their offices – lets them work in peace. At the same time, having more communal areas where they can collaborate is a recommended option.

It encourages employees to collaborate when they want while still giving them a private area. Taking this approach should lead to much more productivity than going with solely open plan or closed-off spaces.

Add Color To The Walls

When you’re figuring out how to redesign your office for productivity, the walls should be one of the first things you look at. They’ll cover quite a large area, so they’ll make an impression.

You’ll need to give particular thought to what colors you use. It’s recommended that you avoid white, as that can have a negative impact on productivity.

Instead, blue could be much better recommended. Several studies have associated this with productivity. At the same time, green has been associated with creativity.

Red can also be a recommended option for detail orientation. Depending on exactly what you’re looking for, you should compare each of these options.

It could be worth having a blend of them across the office. Doing so will maximize the benefits that you see from them.

Quite a few people have complaints about working in an office. One of the most notable is the noise level. It can be distracting.

That distraction then interferes with an employees’ productivity. It’ll also affect their morale. You’ll want to avoid this, so you should keep noise in mind when you’re redesigning the office.

You could take advantage of multiple sound masking systems to minimize this. It’s also worth considering placing noisy machines – such as printers – in areas where the noise wouldn’t affect employees.

If these prove to be too expensive or inappropriate for the office, then supplying noise-canceling headphones to your employees is recommended.

These can be much more effective than you’d think, as it gives employees the ability to focus on their work.

Not many people think of the ceiling when they’re redesigning their office. It could be worth paying attention to them.

If it’s possible, then you might want to consider raising the ceiling. Multiple studies have shown that employees are more productive if the ceiling is at least 10 feet high.

In cases where offices have raised the height of the ceiling, they’ve typically seen more creative employees. The spaciousness associated with higher ceilings leads to freer and more creative thinking.

While the results may be relatively minimal, they could be much higher than you’d expect. The cost of raising the ceiling should pay off significantly in increased productivity and higher revenues.

How To Redesign Your Office So That Employees Will Like It

Once you know how to redesign your office for productivity, you might want to get started on it. You shouldn’t simply dive straight into it, however.

While the above can improve employee productivity, it’ll only be when you do it the right way. Failing to do so could lead to a negative impact.

You’ll need to keep your employees’ happiness in mind with this. That could be more difficult than you’d think. You’ll need to strike a delicate balance between productivity and morale.

There are a few tips and tricks you can keep in mind when you’re upgrading your office. Some of the largest include:

When you’re redesigning your office to increase productivity, you should keep the above in mind. Employee happiness is vital to productivity.

Striking a balance between happiness and productivity is essential. While this might take time and some changes, it’ll be more than worth it.

Once you know how to redesign your office for productivity, you should see an increase in employee output. Redesigning isn’t the only thing you should focus on, however.

If you want your employees to be more effective, you’ll need to take a holistic approach. Multiple factors can affect this.

Employee benefits, rewards, and much more can all have an impact on productivity. The more you focus on these, the more productive your workers should be.