Why Are So Many People Trapped In Debt? 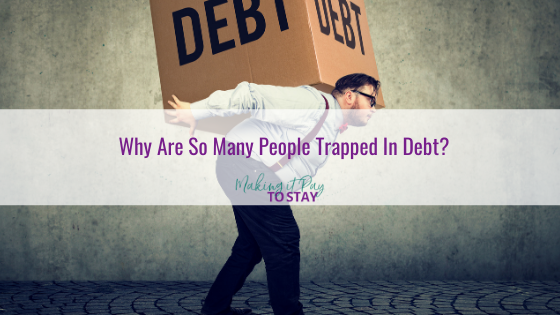 The number of people that are living with large debts is staggering. In fact, the average personal debt in the US is over $90,000 and having debt has been normalized to such an extent that a lot of people think that you can’t get by without borrowing money. This often causes people to get trapped in a cycle of debt that they can’t get out of. Although people think that this is unavoidable, that isn’t the case at all and, in most cases, there is a reason why people can’t get out of debt. These are some of the most common reasons why people get trapped in a cycle of debt.

They Don’t Understand Their Debt

Failing to understand the nature of your debts and what it is that you are actually paying for makes it a lot harder to sort your finances. For example, a lot of people don’t realize that paying their minimum payments every month isn’t really clearing their debt, they’re just paying off the interest each month. Many people also fail to understand the serious impact that debt can have on their health and wellbeing as well as their finances. But organizations like the Debt to Success System can help you to understand exactly how your debt works and how you can clear it a lot faster. If you are wondering, what is Debt to Success System, do some research online and make an effort to understand your debt properly. Once you know how the debt system works and how lenders take advantage of borrowers to make money, you will find it a lot easier to clear your debts.

They Don’t Have An Emergency Fund

One of the reasons that people get into debt in the first place is that they are not prepared for unexpected expenses. If your car breaks down or your boiler packs up and you don’t have the money to cover the cost, you will be forced to borrow money. That’s why it’s important that you prepare for the worst with your finances and build an emergency fund. That way, you won’t be forced to rely on borrowing in the first place.

They Aren’t Prepared To Make Sacrifices

If you are in a tricky financial situation and you need to find extra money to pay off your debts, you need to make some serious cutbacks. Unfortunately, a lot of people are not prepared to make sacrifices so when they look over their budget and consider which items are luxuries and which are necessary, their priorities are wrong. For example, things like streaming services or cable packages are not necessities, they are luxuries. Buying lunch at work every day instead of making it at home is a luxury. Unless you are prepared to sacrifice these things in the short term, you will never get out of debt.

These are all common reasons why people are trapped in debt but the number one reason is that people buy into the lie about debt. They think that it’s perfectly normal to have a lot of debts and there is no way around it, but that isn’t the case. If you change your financial behavior, there is no reason why you can’t be debt free.