4 Reasons Your Commute Can Immediately Ruin Your Day 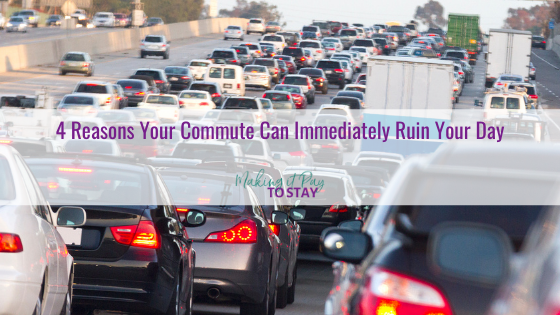 For many years, the commute was an essential element of the workday. How else would you get to work without it? No one particularly enjoyed the commute, but there was nothing they could do about it until the events of the past two years demonstrated a shift in working habits. Despite the success of remote working, many offices still want to bring employees back full-time, forcing them back into a commute that could ruin their day before they sit down at their desks. But how?

You get it. Everyone is in a mood first thing in the morning. They have been dragged out of bed by their alarm; burned their toast; struggled to get the car started. The last thing they want is to wait in traffic to get into the office.

It’s no surprise that road rage along with distracted driving can ruin your day before you make it to the office. People are in such a rush to get to work that they drive too aggressively or stop paying attention because they’re trying to get other things done while behind the wheel.

Even if your commute is generally pleasant, you still wish it was a little shorter so you could steal a few extra minutes in bed or even take your time eating your breakfast. By the time you get to work, you already feel you’ve traveled far enough for the day, and that’s before you need to drive home.

This commonly happens with office relocations that do not take into account employee homes. Businesses can overcome this by using a distance matrix service to identify the most suitable location for the office that does not force employees into hour-plus long commutes both ways.

If you don’t drive, you have a few options, but they are either unsafe (cycling), expensive (taxis), or inconvenient (subway). No one wants to stuff themselves into an unnecessarily sweaty subway cabin first thing in the morning, but for many, it’s the only option.

The jostling you encounter is not even the worst of it, though. Research has discovered that subway pollution is even worse than the pollution encountered when driving, which puts other elements of your health at risk.

Another significant health issue that can ruin your day is the increased lack of physical activity that comes from a car or subway commute. You already know how important it is to remain active, especially in the morning, but sitting in your car for an hour won’t do you any favors.

You can overcome this by walking or cycling to work while pushing yourself into a morning gym session every day can help. However, this is not feasible for everybody, which makes it difficult to find a solution that can benefit everyone.

The commute is still vital for many businesses, especially in the retail and hospitality industries. However, if you are primarily office-based, you may want to think twice about getting into your car or queuing at the subway station. For business owners, consider how you can offer your employees a safer and healthier alternative to the traditional morning commute and reap the benefits.